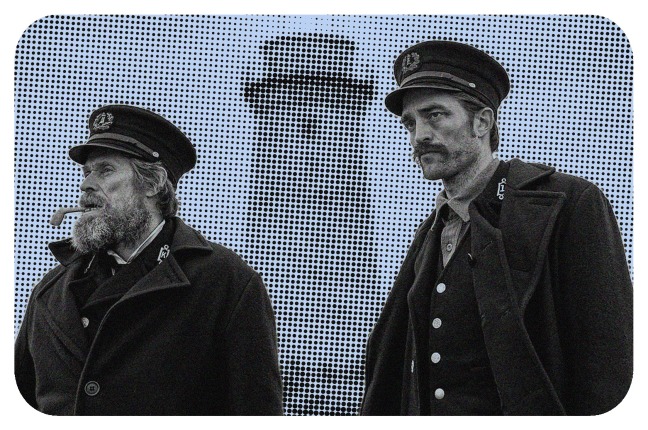 With his 2016 feature debut The Witch, writer/director Robert Eggers established himself as a big name and has fittingly returned with The Lighthouse, a dark and stormy tale of cabin fever at its finest.

Taking place on an isolated New England island in the 1890s, The Lighthouse follows two lighthouse keepers: the experienced Thomas Wake (Willem Dafoe) and the rookie Ephraim Winslow (Robert Pattinson). Things seems relatively routine at first but Winslow quickly notices things aren’t exactly normal on the island. Wake is fixated on the light of the lighthouse which Winslow is not allowed to see and a strange gull is frustrating him at every turn. Things only become worse after Winslow goes against Wake’s warnings, forcing them to stay past their original four week stint. What ensues is an intense power struggle between the two men that provokes secrets and hallucinatory horrors.

Right from the get-go, the black and white cinematography is an absolute treat and the score from Mark Korven sets a strong tone for story. It’s almost reminiscent to Ennio Morricone’s score from The Hateful Eight at times, but perfectly fits the horror on the high seas. The blaring siren that haunts the entire film gives the island a presence and feels like another character in itself. Choosing to shoot in black and white makes for a unique viewing experience and forces things stand out much stronger. It’s easy to understand why the two are so fixated on the light, as it’s one of the only things that breaks through the bleak and dark atmosphere. Not to mention, Eggers utilizes it to highlight small details and secrets along the way.

If you’re going have film with two characters for the entirety, you’re going to need the right actors to keep viewers engaged and on the edge of their seats – and Eggers definitely finds that in Pattinson and Dafoe. They are immaculate in creating a tense underlying rivalry between their characters. Pattinson is a mystery throughout the entire film as Winslow has secrets about his past as a timber man. Dafoe is no stranger to being a little crazy on-screen, but as Wake he brings out more of a mysterious and obsessive side that’s mesmerising. On their own, these two put in performances that should place them at the top of awards conversations and together they absolutely have audiences hanging off every word as they battle for dominance.

The Lighthouse is a study on cabin fever and the lengths men will go to be the dominating force, with the light being their symbol of power. Like The Witch, this film is a slow-burner that has the two men slowly get on each other’s nerves enough to eventually make each other snap. From the big shifts in emotion with every chastising dig they throw at one another, to the simple way that Wake openly farts in Winslow’s presence to piss him off, the escalating tension between the two is totally enthralling to watch – and often funny. Eggers utilizes the humor of these situations to constantly shift the tone of their conversations. This quick movement between drama and comedy is what makes the slow descent into madness so believable and each scene even more engaging than the last.

However, Eggers may lose viewers in his more hallucinatory moments, which are hard to handle at times. While Dafoe and Pattinson give great performances, it’s sometimes hard to understand them through their thick accents. This becomes a problem when a lot of the significant moments are explained through long-winded speeches, metaphors, and discussions between the two. It sometimes feel like you’re trying to solve a puzzle without having all of the pieces at hand. On one hand, these kinds of horrors perfectly evoke Eggers’ clear inspirations of H.P. Lovecraft and create moments that audiences will never forget. On the other hand, some would say that the film is incredibly hard to follow and will be turned off by how unconventional it is.

These issues are what keeps me from saying that The Lighthouse is a film that I completely loved, but it’s possible that a second viewing, which the film definitely earns, could clear things up. Either way, its undeniable that Eggers’ sophomore outing is a mind-bending experience and a strong contender when awards season rolls around.

The Lighthouse won’t be for everyone, but it’s the kind of film I’d like to see more of – bold, weird, and connective in a way that leaves its mark on viewers way after the credits roll. A bellow from a new visionary in film who’s ready to bring viewers into his weird yet intriguing mind, to deliver stories that need to be seen.